In the previous patches 11.9 and 11.10, we saw several champions getting nerfed, such as Diana, Hecarim, Jinx, Morgana, and even Dr. Mundo!

We weren’t as ecstatic to see buffs for Lulu, Xerath, Kayn, and Shen. Riot Games amped up one of the top-performing supports today: Lulu!

Still…Riot Games made some pretty exciting changes for Patch 11.11 and even 11.12! We’re itching to share all the details with you so let’s get right into it!

League of Legends Patch 11.11 Updates [Read This Before You Start Your Next Ranked Solo/Duo Queue]

Ezreal mains, this just might be your season! More importantly, champions like Graves, Teemo, Seraphine, and Azir were all buffed!

Here’s a quick list of what to expect from this League of Legends patch update and what we’ll share with you today:

Here’s the complete list of champions getting buffed in League of Legends Patch 11.11:

In the League of Legends patch 11.5, Riot Games initially nerfed Azir because he was dominating pro play and enemy champions almost too easily.

Patch 11.11 changes all that! They’re placing Azir back into the game!

For ranged users like Ezreal, Riot noticed Ezreal’s been struggling to perform in all levels of play. This time, Ezreal mains finally get to steal the spotlight from other ADC’s!

Specifically, Ezreal’s health regen growth and armor are bumped up by a small notch:

Is jungling with Graves a struggle? Can’t seem to gank your lane and farm efficiently?

Graves’ base AD growth just got boosted from 3 to 4!

Talk about a boost against jungle monsters!

Good thing Riot nerfed him in League of Legends patch 11.9! But wait! Because Hecarim’s making a comeback – a solid one at that!

League of Legends patch 11.11 made 2 changes to Hecarim’s abilities:

Believe it or not, but Nautilus was once a solid jungler. However, we’ve seen a lot of players use Nautilus as a support especially with ranged users like Ezreal, Jhin, Jinx, and Caitlyn.

League of Legends patch 11.10 took a downturn for Ryze as the Phase Rush nerf left Ryze with lower movement speed and health.

We’re happy to announce Ryze gets some of his health back!

Guess what. Seraphine got buffed…AGAIN.

Instead of her maximum health, Riot decided to up and boost her shield power! Once Seraphine reaches higher levels, expect a better shield to protect her allies and herself!

Even with Singed’s latest buff in League of Legends patch 11.10, this wasn’t enough to help Singed perform beyond what many expected.

This should give Singed players more options and chances to win against enemy champions late game.

This mobile poison mushroom monster can kill champions easily by sneakily planting mushrooms just about everywhere and strategically. Don’t get us started with Teemo’s AOE damage.

It’s rock-solid damage you do not want to underestimate. So what’s Teemo’s buff in the latest update? Well…

Now Teemo can chase you, blind you, then hope you end up stumbling on his mushroom. What a monster.

Here’s a complete list of nerfed champions in the latest patch update:

We haven’t played against many Elise junglers, but one thing’s for sure: she’s not to be understimated.

Her spider form is a signal to turn tail and run for most who are familiar with just how much damage it deals. Lucky for you, Riot nerfed Elise’s on-hit damage ratio:

It’s not that huge of a decrease, but with Elise’s AP ratio down, a 1v1 for Elise won’t be what it used to be.

With all Lee sin’s buffs and Faker’s skills, he’s an unbeatable champ and quite the headache to deal with.

As a result, Riot decided to pull Lee Sin back a bit and nerf his E ability Tempest:

Take that all you Leona supports!

We’ve seen several players play Leona as support to climb their way through Ranked from Bronze to Gold or Diamond and we’re both happy and sad to her nerfs.

For Leona mains, we apologize. For those who hate going against Leona, this is a good nerf to give you better chances and push or shut her down.

You’ve all seen Morgana’s ability to jungle since patch 11.8. And although patch 11.11 puts a nerf on her ability, she still has the same solid potential as a jungler.

Riot intended for this nerf to happen so that Morgana’s jungle ability doesn’t outshine her primary roles.

W Tormented Shadow damage against non-epic monsters: From 185% to 155%

This means her damage to monsters decreased with the latest patch.

Qiyana’s been shining brightly for her ability to evade and run from almost every near-death experience.

Every chase puts Qiyana at the top bracket for eluding enemy champions easily. But not anymore!

Not literally, but well…close to that. The latest patch 11.11 reveals a decrease in Rumble’s single target damage to monsters:

Honestly, we hate Shaco. Not hate like angry hate.

It’s more of like…his stealth gets the best of us 8/10 times and sometimes, it’s the reason we become the losing team or…our drake gets stolen.

Shaco’s nerf is to push players back to good ol’ AD Shaco. His AP jungle and Support builds are significantly stronger than what most overlook, so Riot finally decided to crank this down a bit:

Urgot’s a mean machine with a rock-solid damage ability of purging his foes.

Riot’s made changes to Urgot’s modified damage ratio in the latest patch:

Players will feel the decrease throughout the later stages in the game.

Broken champ Master Yi and A-grade support Senna got some reworks in the latest patch. Let’s go over each champ’s rework below:

We’re seeing major changes to Senna for this patch.

A lot of players have been loving the tank build/Fortfire Gauntlet item Senna has been bringing to matches.

This has greatly improved and boosted her win and play rate. There’s just one problem: Senna is originally a squishy champ.

And that’s why Riot decided to bring back her original yet powerful AP and lethality builds.

Some of you may be disappointed, but this can actually empower Senna’s support ability that goes hand-in-hand with her powerful glass cannon.

Here are the changes: 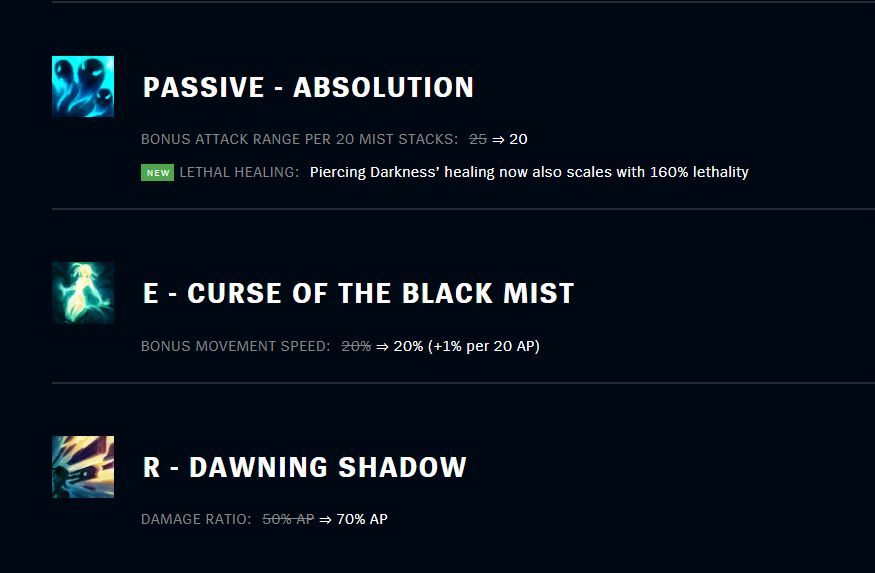 What does this mean for Senna players? It means to start going back to AP and lethality builds! Also, Riot wants to see players stray from the Frostfire tanky build.

There are two changes to Master Yi’s abilities for the latest patch update: 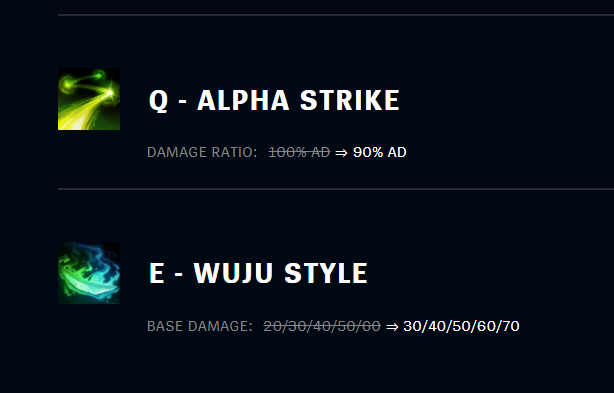 Master Yi’s rework is to shift players from relying on his Q to his base attacks or auto-attacks.

The stars of this Item rework for patch update 11.11 are Thronmail and Bramble Vest.

A lot of players rely on purchasing Bramble vest early on and Thornmail as their second item, which eliminates the intended role of Thornmail: to counter high-healing enemies.

As a result, most players end up using these two items as generalist items. Riot noticed this and decided to make changes to Bramble Vest:

Other changes to items include:

Why the 1100 bonus health? Actually, this bonus health will allow players to gain healing earlier in the game!

Champions like Lulu, Nami, and Janna will find this item to be especially useful!

Frostfire has the MOST rework compared to the other items mentioned in this list.

First, slow is decreased. And second, the cooldown is also increased:

The same goes for the Ornn upgrade: Rimeforged Grasp

The nerf applied to Frostfire Gauntlet and Ornn Upgrade Rimeforged Grasp is a direct nerf for Senna players who abuse this item.

Both vigilant and watchful wardstone were updated, specifically:

Once you reach level 13, it automatically upgrades to Vigilant wardstone. Basically, Visions of Ixtal passive is removed.

Thresh, Leona, and Nautilus will benefit the MOST from this.

Enhanced ability haste, ability power, and health make for an exciting item to see how players use it to their advantage!

So which runes needed adjusting for the latest patch? It’s Hail of Blades and Biscuit delivery, friends.

To start off, Riot increased the cooldown for this rune, particularly because well…Varus, Kai’sa, Tristana. Need we say more?

It’s hard to trade when you’ve got a 6-second cooldown that practically oomphs the already quick attack speed of those three champions.

Thank God, right? At least we get to trade better now.

Well if it isn’t one of our most favorite runes to pick. Hello there biscuit who-has-saved-me-more-times-than-I-can-count-especially-against-tanks.

While most players end up selling these sweet darn biscuits for some pretty gold, the sellback is now way waaayyy low.

So if you’ve got plans to sell them next game, DON’T. Just eat them and get some health instead.

Patch 11.11 made some changes worth reading. We won’t mention all of the changes, only those that might create a bigger impact for your next match:

If you want the complete list of changes to the Nexus Blitz, you can check it here.

These may not be as important, but it’s worth going over a few to give you better insight:

Expect to see these latest and exciting champion skins in patch 11.11!! 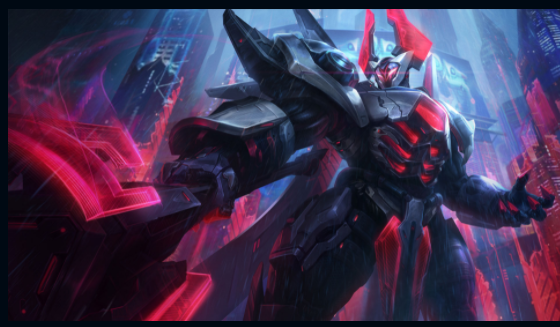 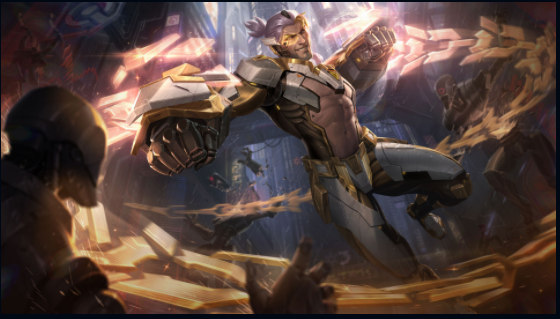 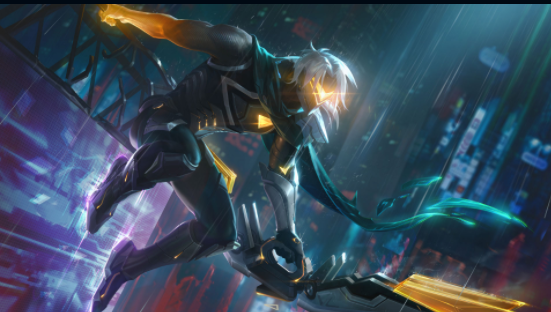 Let’s cut to the chase.

Remember Mundo’s passive where he gains attack damage based on his missing health? That was buffed.

Apart from that missing health rework, this also includes:

The expected update will go live on Wednesday, June 9 2021 based on the following times:

It’s time to take all these reworks and updates to your ranked match! Or blind pick if you’re looking to practice with your champ’s new changes.

Before you go, we hope you subscribe to our website for the latest updates along with an upcoming review of the latest 11.12 patch update!